Posted by Diana J. Limjoco
Asian or Oriental (Aonyx cinerea) small clawed otters are the smallest in the world, weighing less than 5 kilos. (or 11 lbs.) Unlike other otters, they spend most of their time on land. They are considered vulnerable due to habitat loss and being poached for the illegal wildlife trade.

It lives in mangrove swamps, rivers, tidal pools and fresh water wetlands. "Its paws are a distinctive feature, its claws not extending beyond the fleshy end pads of its partially webbed fingers and toes. This gives it a high degree of manual dexterity so that it can use its paws to feed on molluscs, crabs and other small aquatic animals.

The oriental small-clawed otter lives in extended family groups with only the alpha pair breeding; offspring from previous years help to raise the young. Due to ongoing habitat loss, pollution, and hunting in some areas, the oriental small-clawed otter is evaluated as vulnerable on the IUCN Red List of Threatened Species.Oriental small-clawed otters form monogamous pairs for life. The estrous cycle in the female is 28 days with a three-day period of estrus. The mated pairs can have two litters of one to six young per year and the gestation period is about 60 days. The newborn pups are relatively undeveloped; when they are born, they weigh around 50 g, are toothless, practically immobile and their eyes are still closed. They remain in their birthing dens and spend their first few weeks nursing and sleeping. The pups nurse every three to four hours for 10 to 15 minutes at a time. They open their eyes after 40 days and are fully weaned at 14 weeks. In the next 40 days, the young start to eat solid food and can swim three months later. Young otters will stay with their mother until the next litter is born. The male otter assists the female building the nest before birth and in food procurement after parturition. The life span of this species is around 11 to 16 years.

Oriental small-clawed otters are crepuscular animals (active during dusk and dawn), found in remote areas, free of human disturbance. However, some have adapted to life near villages. They continually groom their fur to maintain its insulating qualities. They dry themselves by rolling on the ground or rubbing against logs or vegetation. Asian small-clawed otters are excellent swimmers; they swim by moving their hind legs and tail. They ‘dog-paddle’ with all four feet while swimming or floating. When swimming at a high speed, they undulate their entire bodies, including their tails, up and down while their hind feet steer. They can dive under water for about six to eight minutes. They produce small amounts of feces, known as spraint. The spraints are important for communication among the otters; those with different smells and appearance indicate the presence of strangers. Generally, the otters sleep and rest on land either above ground or in their dens. They often sleep in areas with moderate disturbance. Oriental small-clawed otters are mostly social animals. They live in extended family groups of about 12 individuals. They are often seen playing (which can be seen at zoos) and sliding on muddy banks and in the water in regions where they frequently visit or live. They defend their territories by working, scratching and occasionally fighting.

This species uses vocalizations, scent markings and sign heaps to communicate. It has at least 12 different types of vocalization but scent is the most important sense for communication, especially for marking territorial boundaries. The tails have scent glands which they use to deposit their musky scent on the spraint. The spraint is deposited either in tree trunks or on boulders, trails and pool edges. They also have signed heaps, which are visual indicators of an otter’s presence. A sign heap is a small mound of sand, gravel, grass or mud scraped up by the otter. Besides these methods, they also communicate with chemical and tactile cues, such as social grooming, hormonal changes and posturing.

Oriental small-clawed otters feed mainly on invertebrates such as crustaceans and molluscs, but are also known to feed on vertebrates, in particular amphibians. The hindmost upper teeth (pm4 and m3) are broad and robust and are specialized for crushing the exoskeletons of crabs and other hard shelled prey. They also feed on insects and small fish such as gouramis and catfish. They supplement their diet with rodents and snakes. Apart from crabs, the major prey items are mudskippers (Gobioidei). There is much seasonable variability in the diet. They hunt food by using their vibrissae to detect movements of prey in the water. They use their forepaws to locate and capture items rather than their mouths. Their incomplete webbing gives them a great deal of manual dexterity. They dig in sand and mud for shellfish such as clams, mussels and crab. To get at the meat they crush the shell manually or let heat from the sun force the shells to open.

Oriental small-clawed otters consume small crabs which are considered to be agricultural pests, however, they may uproot plants in the paddy fields. They act as pest population controllers for the farmers by influencing the population of shellfish and crustaceans in their environments."
Referenced from: http://en.wikipedia.org/wiki/Oriental_small-clawed_otter 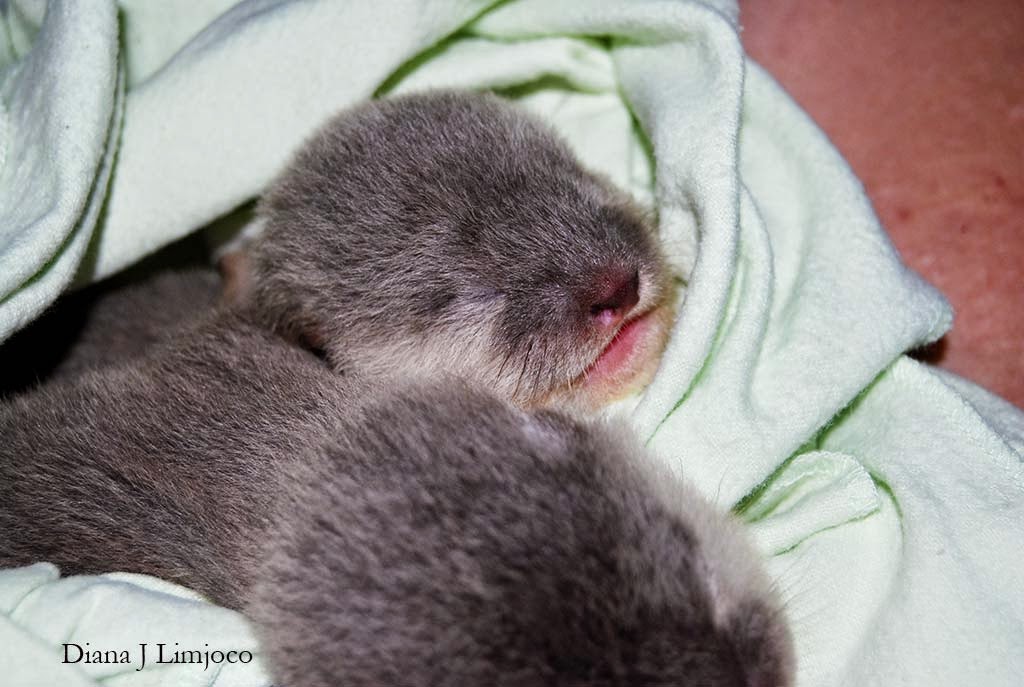 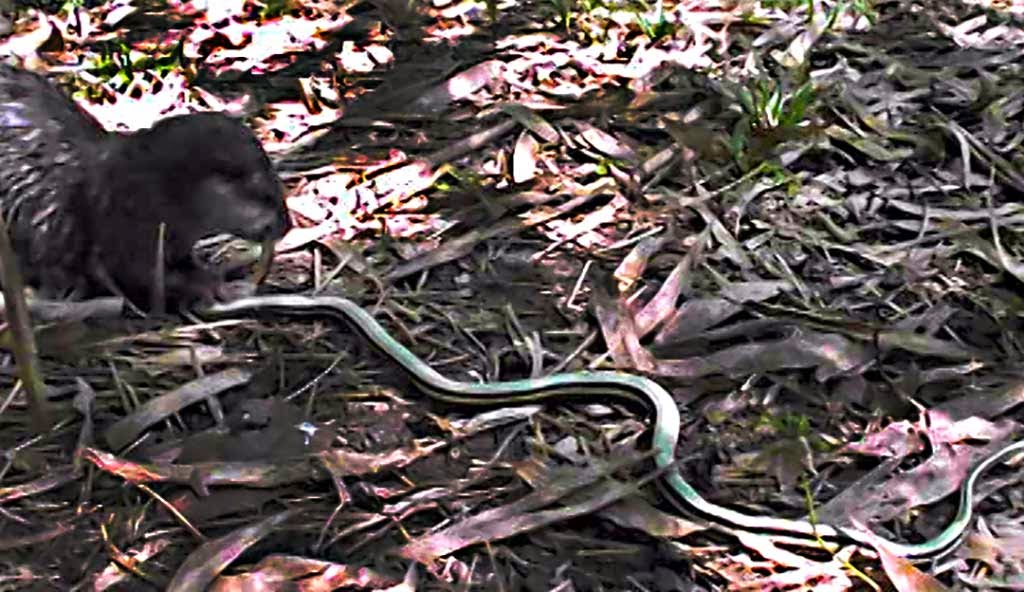 While out foraging for food, the otters encountered a nonvenomous snake. Their surrogate dad was filming. These shots were grabbed from his low-end video camera which is why they are so low quality but you can see bits of the interaction none-the-less. In the end, the snake lost. I think they were lucky it was not a King cobra as I am not sure they are experienced enough yet to tackle on and plus we have spitting cobras and they might have gotten poison in their eyes and perished from the encounter. Follow me on Instagram  palawanottermom Many more videos on my Youtube channel  http://youtube.com/c/ottermom Facebook:  http://facebook.com/otterlysisters Add caption Here is the actual video the stills were taken from. 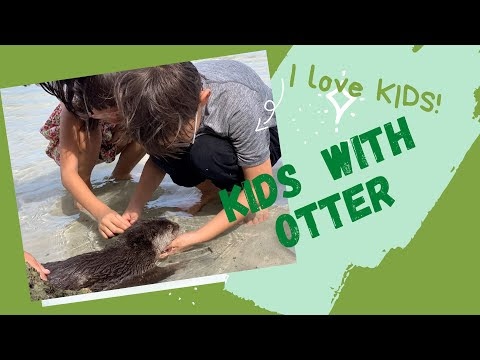 We otter go to the beach

After two failed releases, the otters are still in my care. I take them to the local mangroves they are from for enrichment, foraging, exercise, and entertainment. Since they went Alpha the two sisters can no longer go out together as they fight for territory. It has been very difficult for me and them, but I  do what I can to keep them healthy. We went out to the local beach bordering a mangrove forest the other day and Uma was so happy to be out mucking about in the mud searching for crabs. Uma was digging here and there when she spied some children digging a hole nearby, so she decided to help them out. After all, with 3 human kids, the rewards must be great. Unfortunately, they were only building sandcastles and so she got bored and went back to her own business. The little girl was so cute, she said, “Thanks for helping us dig lil otter.” A big Awwwwww moment for me. Follow me on Instagram  palawanottermom Many more videos on my Youtube channel  http://youtube.com/c/ottermom Fac